Each year, during the first full week of October, individuals and organizations join together for Mental Illness Awareness Week to educate the public on mental health issues and provide support for those who need it.

Recently, in recognition of this week, we conducted a Genomind Mental Health Poll™ of 1,000 people to discover how Americans feel about mental illness, the country’s efforts to help its citizens with mental illness, and how genetic testing may be able to help these patients. Here’s what we found.

Mental illness is prevalent, but America is not doing enough to treat it.

Thirty-four percent of Americans report either having been diagnosed with a mental illness or having a friend or family member who has been. A mere 7 percent think the country does a good job at dealing with mental illness, while 45 percent feel we do a poor job – a percentage more than twice as large as the responses for how the U.S. deals with cancer, heart disease, and diabetes. 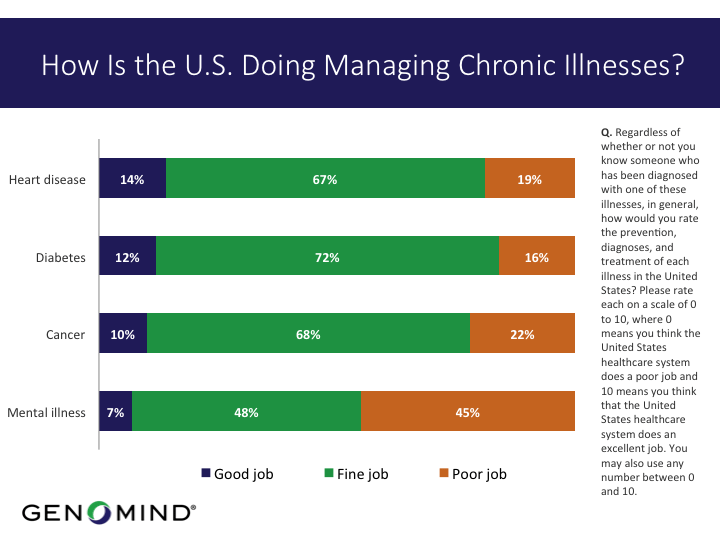 Nearly half of the Genomind Mental Health Poll respondents say the country should be spending more than it does on mental health (currently the U.S. spends roughly 4 percent on mental health of the nearly $2 trillion it spends on healthcare each year), while just 25 percent feel the current balance is about right.

Celebrity involvement is helping, but stigma around mental illness remains.

Recently, celebrities such as Bruce Springsteen and Kristen Bell have spoken out about their own struggles with mental illness. Nearly half of the people surveyed see such involvement as a positive trend and agree it would be great to see more of this – however, 17 percent say that these public figures should keep this information to themselves, saying that it’s a private matter.

People are optimistic about genetic testing, even if they’re skeptical when it comes to mental illness.

Sixty-seven percent of the poll respondents are very or somewhat excited about using genetic tests to individualize patients’ treatments for a wide variety of illnesses to make treatments more effective.

However, when asked specifically if they would take a genetic test recommended by a doctor that would help determine the best treatment plan for mental illness, respondents were less likely to choose to take such a test than they were to take a test to guide treatment for cancer, heart disease, or diabetes. 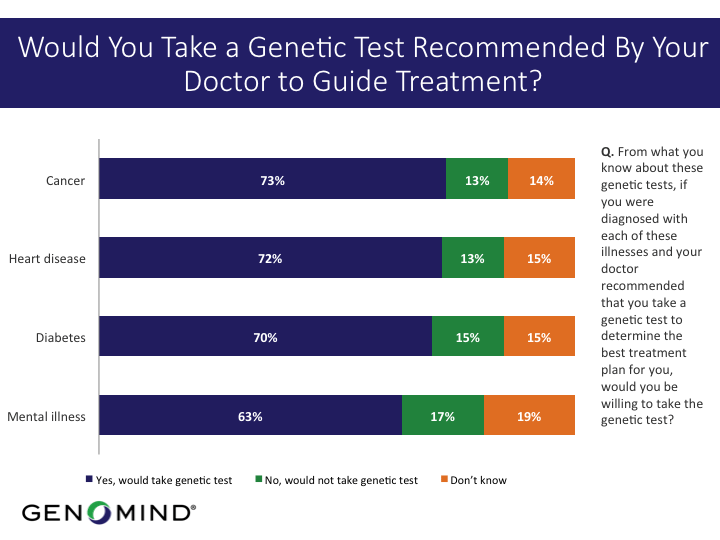 It’s great to hear that a majority (53 percent) agreed that the following was a strong statement to support genetic tests to help guide mental illness treatment: They help reduce the time, expense and struggle of finding the right treatment by trial and error.

We feel this was an important poll to conduct and the results will help inform our work in the future. We look forward to continuing the conversation around genetic testing to help guide mental health treatment.

If you or someone you know may be interested in the Genecept Assay to help guide treatment for mental illness, please view our resources and use them to speak with a clinician to find out if this testing may be right for you.