Anxiety disorders are the most prevalent psychiatric disorders and are associated with a considerable degree of impairment, high health-care utilization, and co-morbidity. It is estimated that 31% of adults in the United States experience an anxiety disorder at some time in their lives.1

What is Generalized Anxiety Disorder?

Generalized anxiety disorder (GAD) is a chronic, debilitating condition characterized by excessive and persistent worrying that interferes with many aspects of daily life. The clinical presentation of GAD is extremely variable among patients, which contributes to the difficulty in recognizing and treating the disorder. GAD affects roughly 3% of the U.S population in any given year, yet it is common for patients with GAD to suffer from symptoms for months to years without seeking or receiving treatment.1-3

How is GAD Treated?

Initial treatment of GAD can consist of medication, psychotherapy, or a combination of both. These treatment approaches are efficacious, however, it is unclear if combination therapy confers greater overall efficacy. Due to the putative neurobiological basis for GAD, pharmacotherapies with evidence of clinical utility tend to target serotonin, norepinephrine, and/or gamma-aminobutyric acid (GABA).1,3

The selective serotonin reuptake inhibitors (SSRIs) or serotonin norepinephrine reuptake inhibitors (SNRIs) are generally considered first-line options for the treatment of GAD based on their safety and tolerability.  It is important to recognize that some patients require starting with small initial daily doses to minimize experiencing antidepressant-induced jitteriness or activation. Response to treatment is described as remitted, improved, partial response, or non-response after 4-6 weeks.2

If at least a partial response has occurred after 4-6 weeks of an adequate trial, pharmacotherapy should be titrated to a maximal tolerated dose and response evaluated at 12 weeks. If full symptoms persist after an adequate trial of a first-line medication, treatment guidelines recommend switching to another SSRI or SNRI. In GAD it is estimated that 61 – 67% of patients will not achieve remission with initial SSRI pharmacotherapy.2

Complicating successful pharmacological treatment of GAD is the high rate of psychiatric comorbidity among patients with GAD. It has been estimated that 90% of patients with GAD have at least one additional lifetime mental health disorder. Depending on comorbidities and other clinical features, duloxetine, venlafaxine, benzodiazepines, hydroxyzine, buspirone, pregabalin, or a second-generation antipsychotic (SGA) may be considered as alternatives or as augmentation.2,4

The Psychopharmacology Algorithm Project at Harvard South Shore (PAPHSS) evaluated the evidence for the effectiveness and safety of the possible treatment options in GAD and sequenced them in accordance with their potential value in particular contexts into an algorithm.2,4  Shown below is a visual adapted from the 2016 PAPHSS Algorithm for GAD: 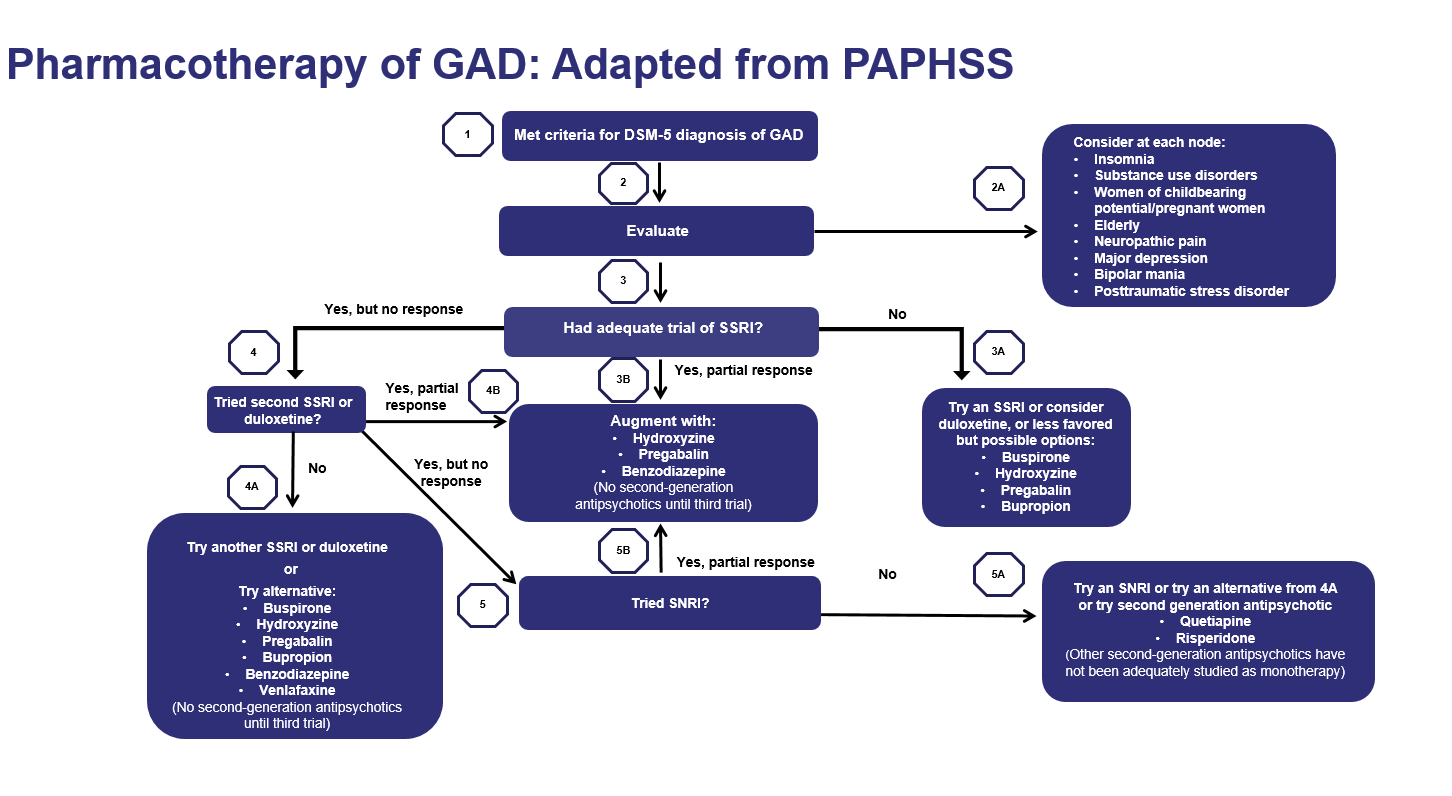 Response to pharmacologic treatment for GAD is estimated to occur in 50 – 60% of patients but remission in only 30 – 50%. The choice of medication for the treatment of GAD should be based on co-morbidities, patient age, target symptoms, and several other individual patient considerations.3,5

But what if we can get a deeper look into some of these patient-specific factors? It is important to consider that one of the factors that may influence pharmacologic treatment response in GAD is pharmacogenetics. Our next article, Pharmacokinetic Genes in Generalized Anxiety Disorder Treatment | Part One: CYP450, will explore how mutations in the pharmacokinetic genes can affect the efficacy and safety of pharmacologic treatments for generalized anxiety disorder.