Most cells in the human body contain a complete set of instructions for building all of their components and the components of every other type of human cell. These instructions are stored on several long chains made of a molecule called deoxyribonucleic acid, also known as DNA.

DNA or Deoxyribonucleic acid is the blueprint of life and contains all of the information an organism needs to grow, thrive, and reproduce. Strands of DNA form a double helix structure and are composed of four different nucleotide building blocks: adenine (A), guanine (G), thymine (T), and cytosine (C). The pairing of these nucleotides forms the “rungs” of the ladder; adenine always pairs with thymine, and guanine always pairs with cytosine. 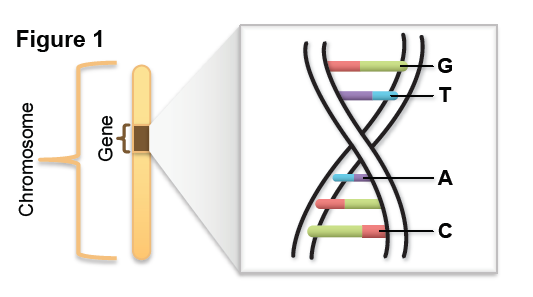 Each long strand of DNA is condensed into a structure called a chromosome. Human cells contain 23 pairs of chromosomes, with half of each pair originating from each individual’s parents.

Each chromosome contains hundreds to thousands of the estimated total 20,000 to 25,000 genes in the human genome. Each gene resides at a specific location on a chromosome and comprises about 27,000 base pairs, on average.

While the common understanding that each individual has a unique genetic code is accurate, all humans’ functional DNA sequences are about 99.9% identical.

Different versions of the same gene are referred to as alleles or variants, and various combinations of alleles inherited from an individual’s parent’s account for most of the variation observable from person to person.

Though these alleles may differ from one another through a tiny number of individual nucleotide variations called single-nucleotide polymorphisms, or SNPs, these minor differences may result in significantly different outcomes. 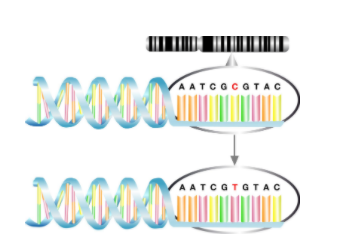 What are genotypes and phenotypes?

Since each person’s chromosomes occur in pairs (commonly referred to as homologous chromosomes), and each of those chromosomes comes from one parent, individuals inherit an allele for each gene from each parent.

The specific combination of alleles present in an individual is referred to as that individual’s genotype.

An individual’s observable characteristics, which result from a combination of the effects of their genotype and their environment, are referred to as their phenotype.

In many cases, multiple genes may contribute to a single characteristic or trait. It is also important to remember that while some phenotypic characteristics are a direct result of a person’s genotype, the development of a phenotype is often much more complex and may involve a significant contribution of environmental and other factors.

What is gene expression and why is it important?

The information encoded in genes is ultimately used to provide the blueprint for proteins, which play essential structural and functional roles at the cellular level.

Much like DNA, proteins are also made up of long strands of linked molecules called amino acids, of which there are 21 different varieties in human proteins. The order of the amino acids on a protein chain and the chemical interactions of the different amino acids cause proteins to fold upon themselves into specific shapes that determine their function. The process of a gene in a cell being used to create its encoded protein is called gene expression.

Though cells in the body each contain a complete set of DNA, they will only express a certain subset of genes depending on the proteins needed to perform their specific cellular function; this results in the wide variation observable between cell types.

Since 21 different amino acids can potentially be incorporated into a protein, but only four different nucleic acids are present in DNA sequences, minor changes to the nucleic acid sequence, such as the deletion or insertion of a nucleotide, can have dramatic effects on the proteins encoded by a particular gene. These changes in the genetic code are known as mutations, and may be due to factors such as chemicals, radiation, or may occur at random.

What are gene mutations and how do they affect us?

Mutations may have no discernible effect, may have a harmful effect, or may confer an advantage over the most common allele (also known as the “wild type”).

A mutated variant of a gene may be passed on from the individual in which it first appeared to their offspring; over time, this would increase the prevalence of the mutated gene in the overall population. 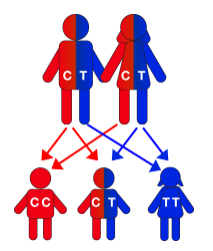 The study of genetics requires a microscopic look into a tiny, but complex part of the body: DNA. Genomind’s advanced genetic and pharmacogenetic tests focus on looking at a group of key genes specific to mental health treatments. Studying your patients’ genetics allows you to identify variations in their genes, understand their predispositions, and determine how they may respond to and metabolize medications.