Introduction to Pharmacokinetics: Four Steps in a Drug’s Journey Through the Body Many factors can influence the therapeutic efficacy of a drug, including pharmacokinetics, which refers to the passage of drugs into the body, through it, and out of the body.

Think of pharmacokinetics as a drug’s journey through the body, during which it passes through four different phases: absorption, distribution, metabolism, and excretion (ADME). The four steps are: 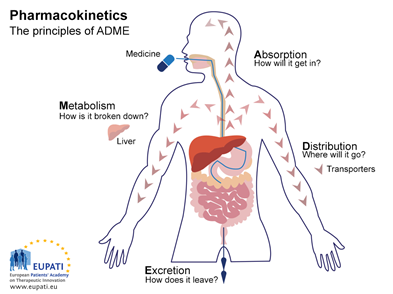 Let’s look at these phases in more detail:

Absorption is the movement of a drug from its site of administration to the bloodstream. The rate and extent of drug absorption depend on multiple factors, such as:

The administration (e.g., oral, intravenous, inhalation) of a drug influences bioavailability, the fraction of the active form of a drug that enters the bloodstream and successfully reaches its target site.

When a drug is given intravenously, absorption is not required, and bioavailability is 100% because the active form of the medicine is delivered immediately to the systemic circulation. However, orally administered medications have incomplete absorption and result in less drug delivery to the site of action. For example, many orally administered drugs are metabolized within the gut wall or the liver before reaching the systemic circulation. This is referred to as first-pass metabolism, which reduces drug absorption.

The process of drug distribution is important because it can affect how much drug ends up in the active sites, and thus drug efficacy and toxicity. A drug will move from the absorption site to tissues around the body, such as brain tissue, fat, and muscle. Many factors could influence this, such as blood flow, lipophilicity, molecular size, and how the drug interacts with the components of blood, like plasma proteins.

Additionally, there are anatomical barriers found in certain organs like the blood-brain barrier, preventing certain drugs from going into brain tissue. Drugs with certain characteristics, like high lipophilicity, small size, and molecular weight will be better able to cross the blood brain barrier.

Cytochrome P450 (CYP450) enzymes are responsible for the biotransformation or metabolism of about 70-80% of all drugs in clinical use.

What are some factors that affect drug metabolism?

Generally, when a drug is metabolized through CYP450 enzymes, it results in inactive metabolites, which have none of the original drug’s pharmacologic activity. However, certain medications, like codeine, are inactive and become converted in the body into a pharmacologically active drug. These are commonly referred to as prodrugs.

As you can imagine, having genetic variations in CYP2D6, the metabolic pathway for codeine, can have significant clinical consequences. Usually, CYP2D6 poor metabolizers (PMs) have higher serum levels of active drugs. In codeine, PMs have higher serum levels of the inactive drug, which could result in inefficacy. Conversely, ultra-rapid metabolizers (UMs) will transform codeine to morphine extremely quickly, resulting in toxic morphine levels.

The FDA added a black box warning to the codeine drug label, stating that respiratory depression and death have occurred in children who received codeine following a tonsillectomy and/or adenoidectomy and who have evidence of being a CYP2D6 UM.

Elimination involves both the metabolism and the excretion of the drug through the kidneys, and to a much smaller degree, into the bile.

Excretion into the urine through the kidneys is one of the most important mechanisms of drug removal.

Many factors affect excretion, such as:

Whether it’s a patient who just had gastric bypass surgery, a CYP2D6 poor metabolizer, or a patient with renal dysfunction, an individual’s characteristics affect these four processes, which can ultimately influence medication selection.

The world of pharmacokinetics is vast, but understanding the basic mechanisms that govern the pharmacokinetics of a drug is vital to designing individualized treatment regimens for patients.