Management of ADHD with a Focus on PGx | Pharmacodynamic Genes When choosing a medication to treat your patient’s attention-deficit/hyperactivity disorder (ADHD), are you aware that there are several genetic biomarkers that can influence how an individual may respond to and/or tolerate that drug? On the Genomind PGx test you’ll find ADRA2A and COMT, two pharmacodynamic (PD) genes that can impact various pharmacologic treatment options for ADHD.

Pharmacodynamics, often described as “what a drug does to the body”, is the study of the biochemical, physiologic, and molecular effects of drugs on the body.8 PD gene variability could result in changes to these processes and thus affect medication response and/or tolerability. Let’s discuss two PD genes that have been associated with dopaminergic stimulant response.

What is the alpha-2A adrenergic receptor (ADRA2A)?

The alpha-2A adrenergic receptor (ADRA2A) is concentrated in the prefrontal cortex of the brain and is stimulated by norepinephrine (NE) as illustrated in Figure 1.1 NE signaling at this receptor is essential for working memory and executive function. Deficits in prefrontal cortex functioning can lead to poor impulse control, distractibility, hyperactivity, forgetfulness, and poor organization and planning.1 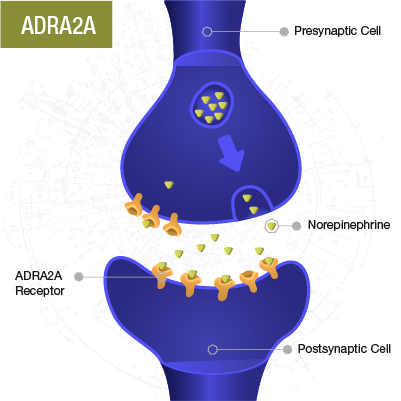 The therapeutic benefit of methylphenidate is partly mediated by reuptake inhibition of the NE transporter and downstream effects on ADRA2A in the prefrontal cortex. A single nucleotide polymorphism (SNP) at 1291 C > G within the ADRA2A gene has been associated with methylphenidate treatment outcomes in children and adolescents with ADHD.2

The G allele of this SNP in ADRA2A has been associated with an improved response to methylphenidate, particularly for inattentive symptoms in children and adolescents (6-18 years old) with ADHD-I.2 The exact mechanism by which this SNP is connected to methylphenidate response is not fully understood at this time.

A naturalistic PGx study found that following treatment with methylphenidate, carriers of the G allele demonstrated greater improvements in the SNAP-IV inattentive score from baseline at both one month and three months (see Figure 2).4 A meta-analysis conducted by Myer and colleagues revealed that in 355 children and adolescents with ADHD, G allele carriers were 69% more likely to have a response to methylphenidate for ADHD compared to those with the C/C genotype.3 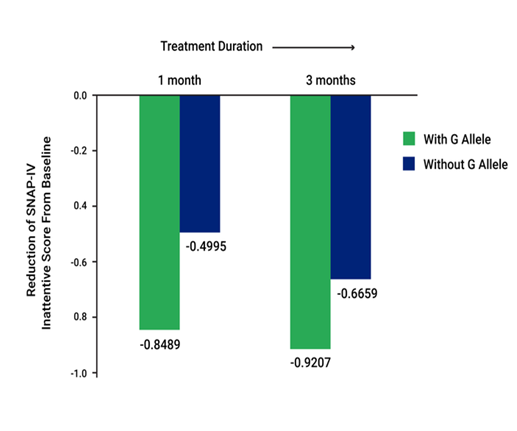 Therapeutic implications of the ADRA2A gene for ADHD treatment

If an individual is an ADRA2A G allele carrier, the Genomind PGx test report will highlight that this variant is associated with an improved response to stimulants (mostly methylphenidate studies) for symptoms of ADHD in children and adolescents as compared to those with the C/C genotype. If clinically indicated, methylphenidate may be considered for ADHD.

If an individual has the C/C genotype (wild-type), the Genomind PGx test report will highlight that this genotype is associated with a reduced response to methylphenidate for symptoms of ADHD in children and adolescents. If clinically appropriate, alternatives to methylphenidate may be considered.

What is catechol-O-methyltransferase (COMT)?

Catechol-O-Methyltransferase (COMT) is a central enzyme that breaks down catecholamines including dopamine, norepinephrine, and epinephrine (see Figure 3). COMT plays a vital role in regulating dopamine signaling in the prefrontal cortex where dopamine transporters (commonly referred to as DAT) are relatively sparse. Dopamine levels here are critical for attention, memory, and other executive functions.5-7 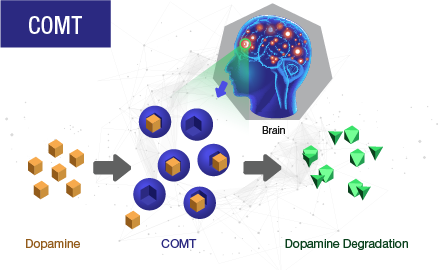 How does the COMT gene affect dopamine?

A SNP in the COMT gene (rs4680, commonly referred to as Val158Met) results in a change of the 158th amino acid in the protein from a valine (Val) to a methionine (Met). This variation is associated with altered enzymatic activity and dopamine levels in the prefrontal cortex.9 As shown below in Figure 4, there are three possible COMT genotypes: 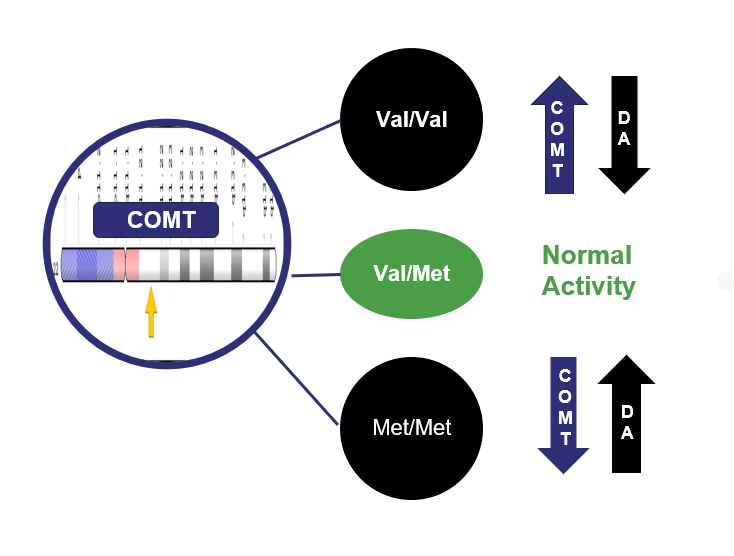 If clinically indicated, dopaminergic stimulants (such as methylphenidate or amphetamine) may lead to greater improvements in executive function in individuals with the Val/Val genotype. A meta-analysis revealed that in 599 children and adolescents with ADHD, individuals with the Val/Val genotype were 40% more likely to respond to methylphenidate compared to the Met allele carriers.3

Therapeutic implications of the COMT gene for ADHD treatment

The Genomind PGx test report will highlight the therapeutic implications of an individual’s COMT genotype as follows:

The Genomind PGx test analyzes important pharmacokinetic and pharmacodynamic genes relevant for the treatment of ADHD, such as ADRA2A and COMT. Specific variants in these pharmacodynamic genes have been associated with the response to dopaminergic stimulants and should be considered in combination with the pharmacokinetic genes that may impact pharmacologic treatments for ADHD. Having insight into an individual’s pharmacogenetics can offer a more personalized approach that takes into account both clinical factors and the patient’s unique genetic predispositions.