What are G-protein-coupled receptors (GPCRs)?

GPCRs are the largest family of membrane proteins and are characterized by the presence of seven transmembrane regions, which may contain one or more neurotransmitter binding sites. The G-protein receptor system interacts with many neurotransmitters and is essential to the signal transduction cascade as it influences the degree of downstream chemical activity. As a simplified overview, signal transduction cascades begin with a first messenger binding to a unique receptor, leading to activation of a different downstream second, third, and subsequent chemical messengers. 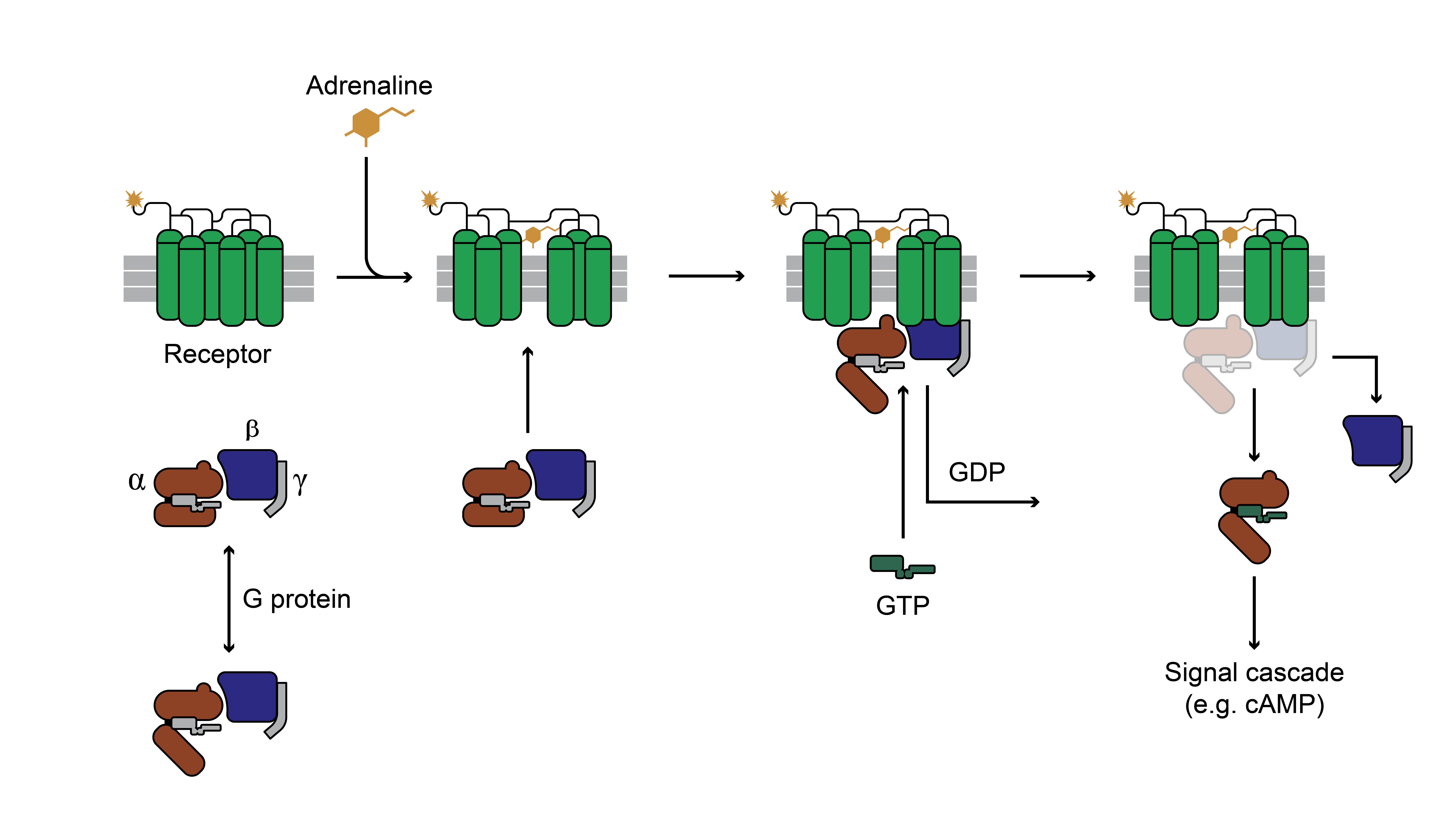 For GPCRs, the first messenger is a neurotransmitter or drug that binds to its receptor and causes a conformational change so that the receptor-neurotransmitter complex can now activate or release the G-protein attached to the intracellular part of the protein.

The G-protein, once activated, will separate into two unique molecules. These modules can then bind to other protein targets within the cell that are capable of synthesizing the second messenger, which can then go on to interact with other intracellular targets (i.e., continuing this cascade to third messengers and beyond). This neurotransmitter-induced molecular cascade will ultimately modify gene expression and be translated into diverse biological actions.

As discussed in the Monoamine Neurotransmitters and Psychopharmacology article, neurotransmission is the foundation of psychopharmacology. It is imperative to recognize and understand the GPCR system as it is essential to signal transduction and is the target of nearly one third of psychotropic medications. Many psychotropics act on the GPCR neurotransmitter binding sites or at allosteric sites on the receptor to modify the downstream molecular events and (hopefully) alleviate psychiatric symptoms.

Drugs can modify the actions of the GPCR in a number of ways that are summarized below:

While we’ve discussed several genes that code for receptors, transporters, and enzymes on the Genomind PGx test, we haven’t really explored why mutations in these genes may affect drug response, side effect rate, or drug exposure.

Depending on where the mutation lies within the DNA, it could produce changes including, but not limited to, a coded protein’s expression, function, mRNA stability, or localization (SNPs: impact on gene function and phenotype).

The genetic polymorphism may also be one part of a haplotype (i.e., several polymorphisms inherited together) in which each mutation plays a small role in drug response and exposure, but when looked at in combination, produce a stronger association that may be more predictive of clinical outcomes (e.g., CYP450 star allele system and drug exposure). It’s also possible that the genetic mutation associated with response or side effect rate is simply in linkage disequilibrium (i.e., non-random association of polymorphisms at different locations within the DNA) with the real culprit responsible for changes in drug response.

In order to simplify interpretation of these complex processes, this section of the Genomind 360 Mental Health Learning Center will focus on the effects of genetic polymorphisms associated with changes in expression and function of G-protein-coupled receptors.

The change from an adenosine to a guanine in the genetic code produces a change in this G-protein-coupled receptor (asparagine replaced by an aspartic acid). This change has been associated with reduced expression of the mRNA and protein in preclinical rodent models, as well as reduced binding potential of opioids in human patients (Ray, 2011; Weerts, 2013).  Decreased binding potential of drugs like morphine and carfentanil may decrease opioidergic signaling, as discussed earlier in this chapter, and reduce the overall analgesic response to these medications.